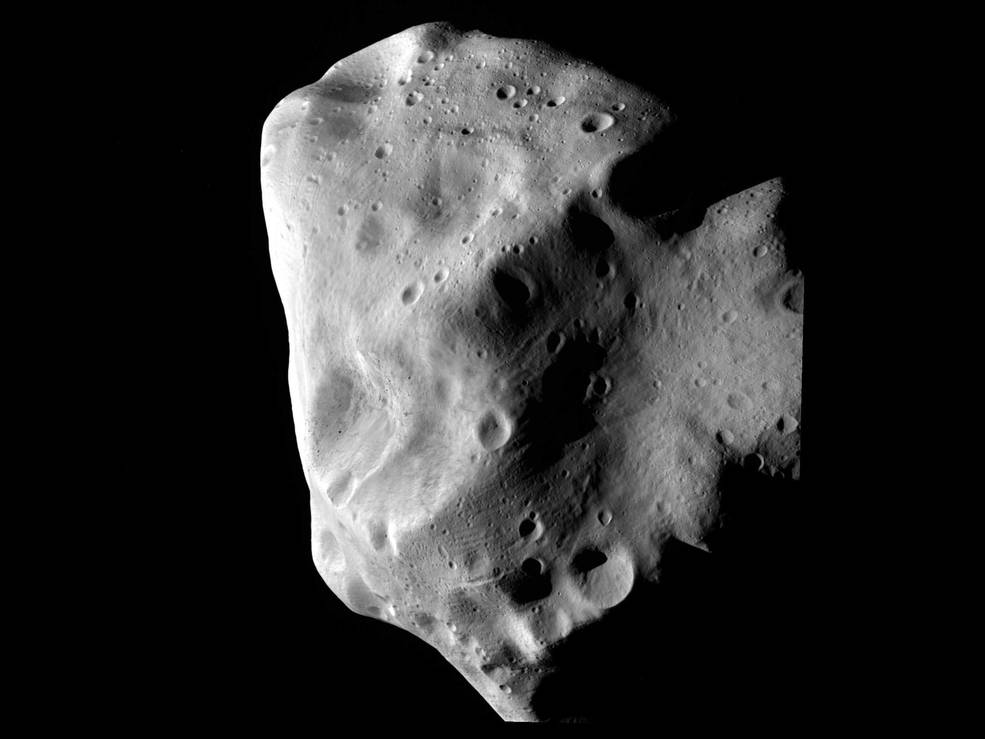 Analysis of asteroids like Lutetia was used in the Josef Hanuš-led paper on asteroid thermophysical modeling. Lutetia is a large main belt asteroid about 62 miles (100 kilometers) in diameter. Lutetia was visited by ESA’s Rosetta spacecraft in 2010.
Credits: ESA 2010 MPS for OSIRIS Team MPS/UPD/LAM/IAA/RSSD/INTA/UPM/DASP/IDA
Full image and caption

Nearly all asteroids are so far away and so small that the astronomical community only knows them as moving points of light. The rare exceptions are asteroids that have been visited by spacecraft, a small number of large asteroids resolved by NASA’s Hubble Space Telescope or large ground-based telescopes, or those that have come close enough for radar imaging.

When seen by optical telescopes, these individual sources of reflected sunlight can provide some very valuable but also very basic information — for example, the asteroid’s orbit, a ballpark estimate of its size, sometimes an approximation of its shape, and perhaps an idea of its physical makeup. But to learn more about these elusive and important celestial objects requires a different type of instrument. An infrared sensor can, in the right circumstances, not only provide data on an asteroid’s orbit and data that can be used to more accurately measure its size, but also chemical makeup and sometimes even its surface characteristics.

NASA’s Near-Earth Object Wide-field Infrared Survey Explorer, or NEOWISE, spacecraft, in orbit around Earth, uses asteroid-hunting thermal sensors that allow an infrared view of asteroids without the obscuring effects of Earth’s atmosphere. In a paper published recently in the journal Icarus, researchers led by Josef Hanuš, a scientist at the Astronomical Institute of Charles University, Prague, have made an in-depth analysis of more than 100 asteroids that have come under the temperature-sensing gaze of NEOWISE. This analysis tripled the number of asteroids which have undergone detailed “thermophysical” modeling of asteroid properties that vary with temperature. The results provide a more accurate glimpse into the surface properties of main belt asteroids and also reinforce the capabilities of spaceborne infrared observatories to accurately assess the sizes of asteroids.

Value of this technique

Thermophysical modeling is a gold mine for asteroid researchers because it allows a more comprehensive analysis of the nature of asteroids. Not all asteroids are suitable for thermophysical modeling because the necessary raw data sets are not always available. But Hanuš’s team found 122 asteroids that not only had NEOWISE data, but also detailed models of their rotation states (how fast an object rotates around its axis, and the orientation of the axis in space) and multi-faceted models of the asteroid’s 3D shape.

“Using archived data from the NEOWISE mission and our previously derived shape models, we were able to create highly detailed thermophysical models of 122 main belt asteroids,” said Hanuš, lead author of the paper. “We now have a better idea of the properties of the surface regolith and show that small asteroids, as well as fast rotating asteroids, have little, if any, dust covering their surfaces.” (Regolith is the term for the broken rocks and dust on the surface.)

It could be difficult for fast-rotating asteroids to retain very fine regolith grains because their low gravity and high spin rates tend to fling small particles off their surfaces and into space. Also, it could be that fast-rotating asteroids do not experience large temperature changes because the sun’s rays are more rapidly distributed across their surfaces. That would reduce or prevent the thermal cracking of an asteroid’s surface material that could cause the generation of fine grains of regolith.

Hanuš’s team also found that their detailed calculations for estimated sizes of the asteroids they studied were consistent with those of the same asteroids calculated by the NEOWISE team using simpler models.

“With the asteroids for which we were able to gather the most information from other sources, our calculations of their sizes were consistent with the radiometrically-derived values performed by the NEOWISE team,” said Hanuš. “The uncertainties were within 10 percent between the two sets of results.”

“This is an important example of how space-based infrared data can accurately characterize asteroids,” said Alan Harris, a senior scientist at the German Aerospace Center (DLR) based in Berlin, Germany, who specializes in thermal modeling of asteroids but was not involved with the study.  “NEOWISE is leading the way in demonstrating the value of space-based infrared observatories for asteroid and near-Earth object discovery and characterization, both vital to our understanding these important inhabitants of our solar system.”

From WISE to NEOWISE

Originally called the Wide-field Infrared Survey Explorer (WISE), the spacecraft was launched in December 2009 to study galaxies, stars, and solar system bodies by imaging the entire sky in infrared light. It was placed in hibernation in 2011 after its primary astrophysics mission was completed. In September 2013, it was reactivated, renamed NEOWISE and assigned a new mission: to assist NASA’s efforts to identify and characterize the population of near-Earth objects. NEOWISE also is characterizing more distant populations of asteroids and comets to provide information about their sizes and compositions.

The thermophysical modeling paper accepted by Icarus is available at:

For more information about NEOWISE, visit:

More information about asteroids and near-Earth objects is at: