Asteroids are small rocky bodies primarily in orbit between Jupiter and Mars (i.e. main-belt). Those observed range in diameter from 948 km (1 Ceres) to a few meters. Near-Earth asteroids (NEAs) are a subset of asteroids whose orbits approach and/or cross the Earth’s orbit. Please visit our sister-site dedicated to near-Earth objects (NEOs) for more information on NEAs. 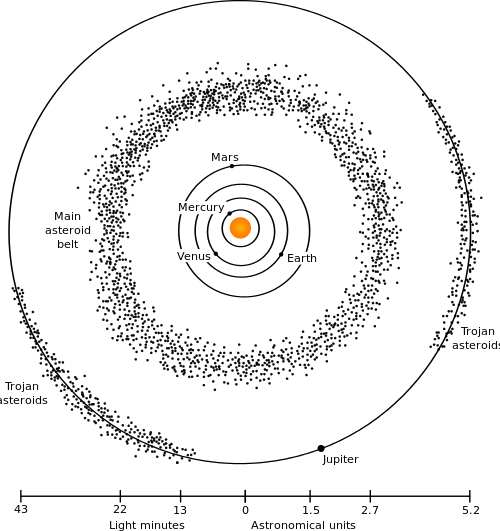 We include Trojans (bodies captured in Jupiter’s 4th and 5th Lagrange points), Centaurs (bodies in orbit between Jupiter and Neptune), and trans-Neptunian objects (orbiting beyond Neptune) in our definition of “asteroid” as used on this site, even though they may more correctly be called “minor planets” instead of asteroids.

The largest trans-Neptunian object (over 2000 km in diameter) is substantially larger than the biggest main-belt asteroid, 1 Ceres (948 km). These outer “asteroids” tend to be less rocky and more icy in composition since they formed farther from the sun. In fact, a group of these objects known as the Kuiper-belt is thought to be the reservoir for short-period comets. The distinction between asteroid and comet has become increasingly difficult to characterize as we learn more about these primordial building blocks of our solar system.

The first asteroid (1 Ceres) was discovered January 1, 1801 by Giuseppe Piazzi at Palermo, Sicily. Read this short article by Don Yeomans to learn why asteroids are particularly interesting and why we should study these primitive bodies.

The orbit of any asteroid (or comet) can be viewed using our java-based orbit applet. Start with our small-body browser to find the asteroid of interest, then select the Orbit Diagram link. For example, here is the orbit diagram for asteroids 1 Ceres.

In addition, there are diagrams showing the distribution of orbital elements for most known inner solar system asteroids and comets. The following diagrams are available:

Physical parameters for asteroids are not well known primarily because these bodies are so small and there are so many. The only parameter determined for nearly all asteroids is the absolute magnitude (H) which can be used to obtain a very rough estimate of an asteroid’s size. However, a few asteroids have other parameters determined including rotation period, geometric albedo, colors (B-V, U-B, I-R), spectral taxonomic type, mass (GM), and bulk density. Known physical parameters for any given small body are are available from our small-body browser.

Asteroid discovery circumstances are also available using our small-body browser. Discovery data are available for only numbered asteroids and include the date of discovery, who discovery the asteroid, and where it was discovered. In addition, for most officially named asteroids, the citation issued for the name is available.

Spacecraft missions to small-bodies provide valuable scientific data ultimately improving our understanding of these primitive solar system bodies. A list of asteroids and comets targeted by spacecraft missions (past, present, and future) is presented on this page.

Radar astrometry for selected asteroids is available in tabular format. A table showing data for only asteroids is presented on this page.