Fastest-Orbiting Asteroid Revolves Around Sun In Only 165 Days

Astronomers have just found an asteroid that zips around the sun every 165 Earth days.

That’s the shortest year for any asteroid known to humankind, discovery team members said. And the space rock, called 2019 AQ3, could be part of a vast and virtually unknown population zooming through the inner solar system, quite close to the sun.

“We have found an extraordinary object whose orbit barely strays beyond Venus’ orbit — that’s a big deal,” Quanzhi Ye, a postdoctoral researcher at the Infrared Processing and Analysis Center (IPAC), an astronomy data and science facility at the California Institute of Technology (Caltech) in Pasadena, said in a statement. [Watch: Asteroid 2019 AQ3’s Superfast Orbit Around the Sun]

2019 AQ3 is a “very rare species,” Ye said, adding that “there might be many more undiscovered asteroids out there like it.” To be clear, asteroid 2019 AQ3’s orbit isn’t the fastest of any object. The planet Mercury makes one trip around the sun every 88 days. But the space rock is unique, researchers said.

Ye spotted 2019 AQ3 on Jan. 4, in images captured by the Zwicky Transient Facility (ZTF), a sky-surveying camera installed on the 48-inch (122 centimeters) Samuel Oschin Telescope at the Palomar Observatory in Southern California. 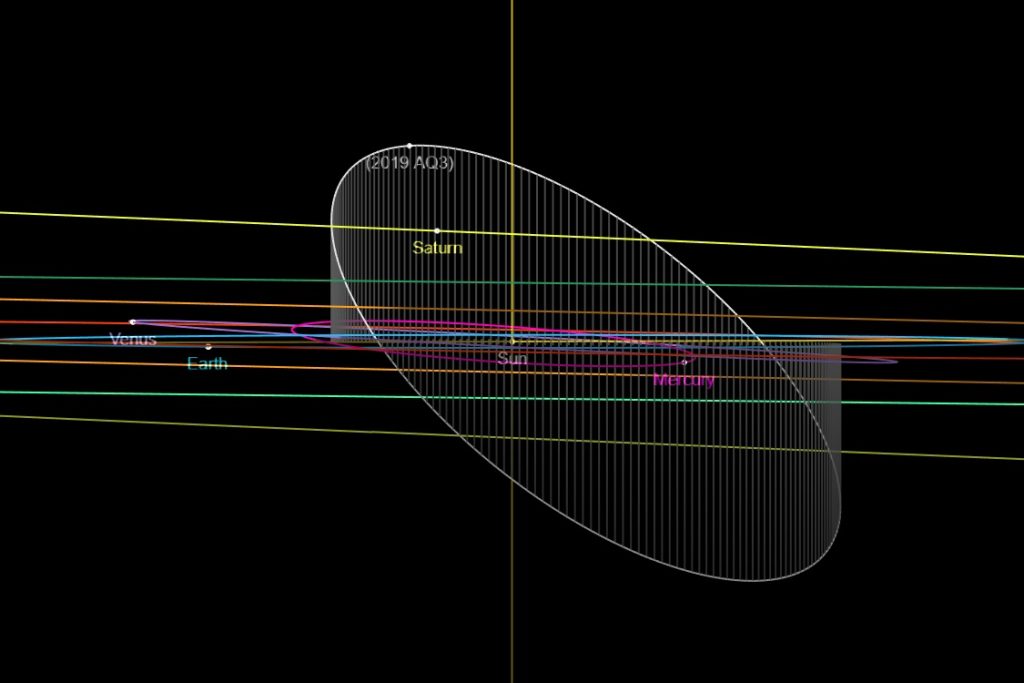 The ZTF, which began operations in March 2018, scans the entire visible northern sky every three nights. Its wide field of view and rapid surveying frequency make the ZTF a great observer of supernova explosions, asteroids and other “transients” — astronomical objects and phenomena that are visible only temporarily.

Ye reported the discovery of 2019 AQ3 to the IAU (International Astronomical Union) Minor Planet Center, the organization responsible for collecting and coordinating data about asteroids and comets in our solar system.

Multiple research groups then observed the object on Jan. 6 and 7, using a variety of telescopes. Astronomers reviewed archived data as well, finding evidence of 2019 AQ3 in images captured by the Panoramic Survey Telescope and Rapid Response System (Pan-STARRS) in Hawaii dating back to 2015.

Putting all this information together, Ye and his colleagues were able to map 2019 AQ3’s orbit in detail. The asteroid zooms around the sun on an elliptical path that takes it inside Mercury’s orbit at closest approach and slightly beyond Venus at its most distant point, the researchers determined. And 2019 AQ3’s orbit is inclined, out of the plane of the paths taken by Earth and the solar system’s other big planets.

2019 AQ3 therefore appears to belong to the Atira (also known as Apohele) class of asteroids, which have orbits interior to that of Earth. Just 20 or so space rocks, out of 800,000 known asteroids, are Atiras, researchers said.

“The origin of Atiras is an intriguing and open question,” discovery team member Wing-Huen Ip, a professor of astronomy and space science at the Institute of Astronomy and Space Science at the National Central University in Taiwan, said in the same statement. “With every additional object, we get closer to formulating and testing models about that origin, and about the history of our solar system.”

Many more Atiras likely exist and the ones that line up Earth in their crosshairs could be especially dangerous, the researchers said. That’s because these asteroids would be coming from the direction of the sun and would thus be hard to spot because of our star’s overpowering glare.

2019 AQ3 is not dangerous, however. Its orbit never brings it closer to Earth than about 22 million miles (35.4 million kilometers), the researchers said.

While the size of the newfound asteroid is unclear, observations suggest that it could be almost 1 mile (1.6 km) wide. If that’s the case, 2019 AQ3 would be one of the biggest Atiras known.

Mike Wall’s book about the search for alien life, “Out There” (Grand Central Publishing, 2018; illustrated by Karl Tate) is out now. Follow him on Twitter @michaeldwall. Follow us @Spacedotcom or Facebook. Originally published on Space.com.