In Nov. 2010, the Catalina Sky Survey in Arizona discovered a near-Earth asteroid as wide as a football field. Before astronomers could fully trace its orbit, however, the receding space rock faded away. It has been lost ever since–that is, until last week when it reappeared, approaching Earth.

The name of the asteroid is 2010 WC9. Marian Urbanik of Čadca, Slovakia, photographed it on May 12th–a barely visible 17th magnitude speck in the constellation Hercules: 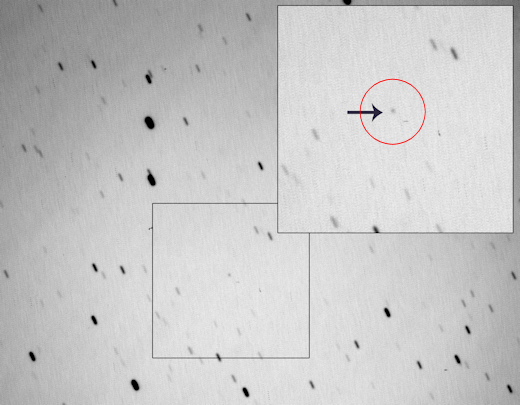 It is about to get much closer and brighter. On May 15th 2010 WC9 will fly past our planet, splitting the distance between Earth and the Moon. At closest approach (203,000 km), it will glow like an 11th magnitude star (~250 times brighter than shown above) as it races through the southern constellation Pavo.

Estimates of 2010 WC9’s size range from 60 m to 130 m wide. This puts it in the class of the Tunguska impactor, which leveled a forest in Siberia in 1908. And it is at least 3 times as large as the Chelyabinsk meteoroid, which exploded in the morning sky over Russia on Feb. 15, 2013, shattering windows and knocking people to the ground

There’s no danger of a collision this time, though. Analysts are certain 2010 WC9 will not hit Earth–neither this week nor in the foreseeable future. New observations of the asteroid in recent days have extended our knowledge of its orbit and eliminated it as a threat for at least the next 100 years.

2010 WC9 is invisible to the naked eye. Advanced amateur astronomers can photograph it, however, using mid-sized telescopes equipped with low-light video cameras. Southern hemisphere observers are favored, expecially those in South Africa and southern parts of South America where the asteroid will be high in the night sky at closest approach. [ephemeris] [3D orbit]