In Oct. 2017, the Pan-STARRS 1 telescope in Hawai’i picked up a faint point of light moving across the sky. At first it appeared to be an ordinary asteroid–but astronomers quickly realized it was something entirely different. The hurtling object, since named “‘Oumuamua,” came from interstellar space. At the time of its discovery, ‘Oumuamua had just swung around the sun. Telescopes around the world swiveled to observe it before it could leave the Solar System. Findings from those rapid observations were published in today’s issue of Nature, and they reveal a very strange object indeed: 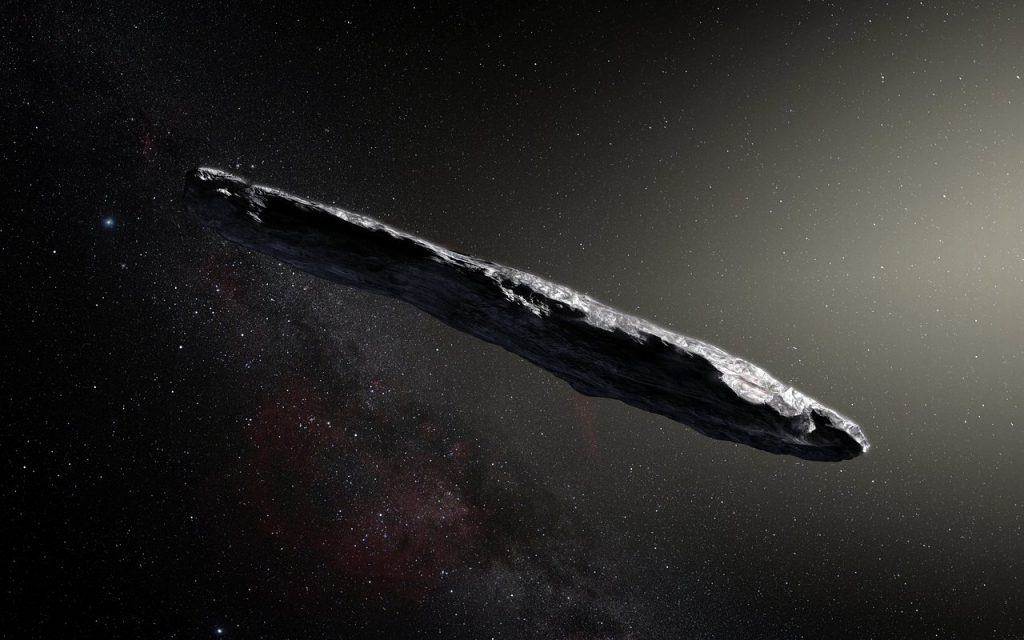 This artist’s impression shows the first interstellar asteroid: `Oumuamua. This unique object was discovered on 19 October 2017 by the Pan-STARRS 1 telescope in Hawai`i. Subsequent observations from ESO’s Very Large Telescope in Chile and other observatories around the world show that it was travelling through space for millions of years before its chance encounter with our star system. `Oumuamua seems to be a dark red highly-elongated metallic or rocky object, about 400 metres long, and is unlike anything normally found in the Solar System.

Above: an artist’s concept of interstellar asteroid ‘Oumuamua [more]

According to a European Southern Observatory (ESO) press release, ‘Oumuamua is “like nothing seen before.” It is red, made of dense rock or metal, and is shaped roughly like a giant cigar at least 400 meters long.

These are the findings of a team of astronomers led by Karen Meech (Institute for Astronomy, Hawai`i, USA) who combined images from the ESO’s Very Large Telescope in Chile with other large telescopes. ‘Oumuamua varies dramatically in brightness by a factor of ten as it spins on its axis every 7.3 hours. “This unusually large variation in brightness means that the object is highly elongated: about ten times as long as it is wide, with a complex, convoluted shape,” says Meech.

The asteroid’s dark red color is probably caused by cosmic rays irradiating its surface for millions of years in deep space. Cosmic rays have a similar coloring effect on asteroids and comets native to our outer Solar System.

Extrapolating ‘Oumuamua’s trajectory back in time, it seems to come from the direction of the star Vega. However, Vega itself moves and was not in the area when ‘Oumuamua was last there ~300,000 years ago. ‘Oumuamua may well have been wandering through the Milky Way, unattached to any star system, for hundreds of millions of years before its chance encounter with the Solar System.

Researchers estimate that interstellar asteroids similar to ‘Oumuamua pass through the inner Solar System about once per year, but they are faint and so have been missed until now.Only recently have survey telescopes such as Pan-STARRS become powerful enough to discover them.

“We are continuing to observe this unique object,” says team member Olivier Hainaut from the ESO in Garching, Germany. “And now that we have found the first interstellar rock, we are getting ready for the next ones!” Stay tuned.